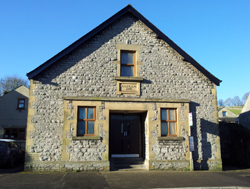 The War Memorial Hall was built in 1923 to commemorate the ‘village lads’ who lost their lives in the first world war.  The Hall was built using money raised by public subscription to provide a facility for the use of local residents.  In the early years the main activities were dances, whist-drives and a film show twice a week.  In 1935 a refreshment room was added and in the 1980s this was demolished to make way for a new two storey extension.  Over the years, as tastes and habits have changed, the Hall has been used by many organisations for coffee mornings, jumble sales, badminton and keep fit classes.

The Centenary Players, who are a village amateur dramatics group, put on an annual pantomime and Bradwell Junior School use the main hall for P.E. lessons.  For the last few years the Junior School has also been using the gallery room as a temporary classroom.

One of the longest running users of the Hall is the Pre-school Group and the doctors from Tideswell have used the Hall as a local surgery.  It is impossible to record all the different types of events that the Hall has been used for but it certainly has been, and continues to be, a great asset to the village.  In the early 1980s more money was raised to build an extension, consisting of a new kitchen, toilets, meeting rooms and a rear entrance.  In 2002, to comply with current legislation, a special toilet for the disabled and a loop sound system to assist those with hearing difficulties were installed.

In 2020, taking advantage of the long closure enforced on us by the Covid-19 pandemic the toilets were completely refurbished and upgraded, to include modern showers and changing areas and in support of the increasing use of the Hall for overnight groups such as Duke of Edinburgh award students.  Some of this work was made possible by grants, but the majority of the financing for the project came from the local Fox and Noblett charity, which had been wound up in 2019.  This use of the funds ensured that they were used in the way envisaged for that charity – for the benefit of the people of Bradwell.

The Charitable Objects are: “The Provision And Maintenance Of A Village Hall For The Use Of The Inhabitants Of The Parish Of Bradwell Without Distinction Of Political, Religious Or Other Opinions, Including Use For Meetings, Lectures And Classes, And For Other Forms Of Recreation And Leisure-Time Occupation, With The object Of Improving The Conditions Of Life For The Said Inhabitants.”

Trustees of the Charity